The Rising of Athi Varadar – Lord Worshiped Once in 40 Years

The History of Athi Varadar

Athi Varadar ‘s God is one of four Lord Varadaraja Deities worshiped by Brahma. In the Satya-yuga Vishwakarma carved this Deity out of Fig tree wood. This was the mula-vigraha worshiped until the early 16th century in the sanctum of the Kanchi Varadaraja Perumal Templo. Due to the Muslim invasion, the Athi Varadar vigraha was secretively immersed within the temple ‘s sacred pushkarani and only one family knew the truth.

The temple had no God to worship so no puja happening in the temple for forty long years. The two brothers in the lineage of Dhatacharya, under whose authority the Deity was hidden, passed away thus removing the secret forever. Their two sons made every attempt to get the Deities back to Kanchipuram. One devotee of Madhwa brought back the utsavar from the forest of Udayar Palayam, and the utsavar puja began.

Unable to locate the original Deity of Athi Varadar, the temple authorities decided to install the Deity made of stone and thus brought the Deity from the Padma Giri in Pazayaseevaram located about 30 km from Kanchipuram. Known as Devaraja Perumal this Deity was worshiped by Athri Rishi. He was very akin to Athi Varadaraja. Pazayaseevaram lies at the confluence of the rivers Payasvini, Vegavathi, and Bahunadhi.

About 1709 the temple pushkarani was cleared, and at the base of the holy tank, Lord Athi Varadar was seen. Then the authorities agreed to take the viagra out for 48 days just once in forty years and hold Him back.

This Deity is kept safe for forty years inside the Ananta Sarovar – Varadaraja Temple temple pushkarani in Kanchipuram. God is taken out for the darshan only once in forty years, for 48 days. This decision was made on the basis of the purple referred to below. 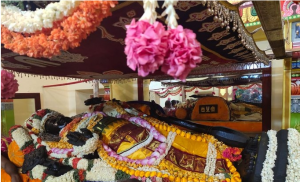 Athi Varadar – why worshiped once in 40 years

Athi Varadar was originally worshiped at Satya-yuga by Lord Brahma, at Treta-yuga by Gajendra, at Dwapara-yuga by Sage Brihaspathi and at Kali-yuga by Ananta Shesha.

The fire once touched the wooden Deity of Sri Athi Varadar while Brahma was performing a yagna (fire sacrifice) at Kanchipuram. Brahma asked the Lord for a solution to worship the Deity; the Lord told him to keep the Deity inside the lake surrounded by Ananta Shesha’s replicas. Hence the Deity is in the temple pond till the date.

While Brahma adored the Deity alone, Lord Vishnu says to Brahma, “You are constantly worshiping Me. You should also give others the opportunity to worship.

To this Lord, Brahma decided to allow only a few nano-seconds to worship the Lord. Likewise, upon the request of Lord Vishnu, when Gajendra and Brihaspathi were worshiping, they only permitted the worship for a few minutes during their time.

How is Athi Varadar Stored in Anantha Saras

Did you get to see the image taken from the temple tank by Athi Varadar? All of this was covered with moss and dirt. I am extremely shocked that an idol made of wood can withstand this kind of thing underwater. If you think about it it, it is indeed a miracle. Athi Varadar’s last time out was in 1979, and now in 2019. In an interview given to The Hindu by Kittu Bhattar, he mentions that “After entering the pond’s top, one has to go down 12 steps deep and a nine-foot tub brimming with water lies there. The image fits exactly in the tub and lies at the bottom of it, with nagabasams (serpent images) attached to the different corners of the tub serving as clamps to prevent the idol from coming out of the tub. We ‘re entering the pond three days before the event, removing the nagabasams and bringing out the idol. The idol is placed for worship for 48 days after cleaning and then put back underwater inside the tub, with the clamps in their place. We apply organic preservatives before putting the idol in the tank so that the salt content in water does not corrode the picture. Here you can read the whole interview-Kanchi Varadar’s Retrieval. This time they distributed the moss stuck to the idol as it seems prasadam when the Athi Varadar was being taken out. I was eager to see the tank of Anantha Saras and the place from where the idol would have been dug out, but then during the visit to the temple, you can see nothing.

The crowd is getting increasingly more and more every day. So be careful when visiting the temple, and be prepared for the crowd. The management of crowds is indeed bad and frightening. To get through this crowd you have to have great faith in God. So this is not a fun event if you just plan to drop by.

The idea that this may be the one time experience in a lifetime makes most of us visit the temple. Almost lakh people visit the temple every day. I must tell I am grateful that Athi Varadar’s darshan was even different at sunset on the day I visited

Athi Varadar has been put back into the Anantha Saras tank as of 17 August 2019. The 48-day festival ended, and for darshan, nearly more than one crore devotee visited Kanchipuram. A special thailam (oil mixture) was applied to the statue and was lowered into the tank of Ananthasaras. The next raising festival of Athi Varadar will take place 40 years from now, which is 2059.