The Hindu Temple Architecture and its Symbolism of Human Body

Temples are an integral part of the Hindu way of life, and with the majority of the population being that of Hindu in India. There are more than 13 small or large lakhs of temples in India, on a rough estimate. This is in addition to the “Pooja space” (room for offering prayers with idols or installed images of deities) in almost all Hindu homes, a private place of worship, where prayers are offered daily.

Every village or town will have one or more temples dedicated to a specific deity, and most regularly visit that temple. While visiting temples is not compulsory, many do offer prayers in their own home on important Hindu festival days or on any auspicious event such as birthday and marriage.

A Hindu temple would usually have the structures below. 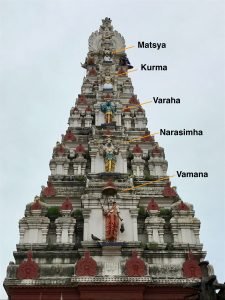 Now let’s understand the significance and purpose of each of the above-mentioned structures and what rituals we should follow during our visit to the temple.

The Lord’s body is the whole of the temple starting with the main entrance and the outermost Prakaram. Therefore you don’t enter the temple with your foot on.

The head is Sreekovil. The face is Inner Prakaram, where Saptamatrukas and Digpalakas are mounted. Wall outside the inner Prakaram called Antahara is God’s wall. In between the Namaskara mandapa is the neck. The principal priest also normally performs poojas here. Outside the Nalambalam is the Madyahara called Agni mandala. Lamps round this wall are lit. The Prakaram outside where Balipeetham is mounted forms the god’s waist. The god’s feet are the main entrance with gopuram.

Sthula Sarira or gross body is the actual mortal body of material that feeds, breathes and moves (acts). It is important to have a very basic understanding of Panchakosa and Shadchakra in order to understand better the temple structure and the philosophy behind each of the elements. 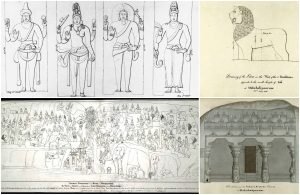 To yogic philosophy, Pancha Kosha is the idea that there are five layers, or sheaths, around the human soul. The term comes from the Sanskrit Pancha, meaning “five” and “sheath” means kosha.

The yoga path is said to improve one’s knowledge of these sheaths and perception of them. Finally, the aim of yoga is to step inward, take a journey through these sheaths and reveal the true nature of one, or Atman (the inner self). Then one finds harmony as Atman’s relationship with Brahman is understood (the eternal Consciousness).

One way to work with Pancha Kosha is to perform a Pancha Kosha meditation on the path to Self-realization, which brings one’s consciousness through the fives sheaths.

Each of the koshas has his own way of relating to our sense of self:

Annamaya kosha –This is the physical body that needs nourishment and fuel to survive. It is said to be the koshas ‘ most fragile and reveals any weaknesses on the other layers. The teaching of Hatha yoga asanas mainly works with the Annamaya kosha. The temple’s exterior wall portrays the annamaya kosha.

Pranamaya kosha –This is the sheath the resides inside the physical body and consists of the strength of life force or prana. This travels through the lymphatic, circulatory, and nervous systems. Pranayama is working with that kosha. The temple’s inner Prakaram stands for Pranamaya Kosha

Manomaya kosha –This is the mind that controls the world’s experience and it is here that one’s sense of self grows along with the way it behaves. Yoga Nidra transcends the two outer koshas to permit penetration of the Manomaya kosha. Inside wall-the Vilakkumadam, the Manomayakosha.

Vijnayanamaya kosha –It’s the conscious body and intellect that determines one’s sense of morals and ethics. It is also responsible for inner development and wisdom learning, which can occur through the study of sacred texts. This is reflected by the Prackaram inside.

Anandamaya kosha –This is the most delicate body, and is generally perceived only in brief happiness flashes. It is where we feel the Universal Consciousness with harmony. Temple Sreekovil stands for Anandamaya kosha.

Only when consciousness is extended further than the material world can this sense of absolute bliss be understood. Meditation is said to help in experiencing Anandamaya kosha every day for at least 20 minutes.

Chakra stands for a wheel. There are six spiritual consciousness centers described as Shadchakras that are supposed to be attached to the spinal cord and linked through several Nadis (channels of energy) to various koshas (sheaths). But these centers are primarily in the Subtle Body (Sukshma sarira). The six chakras are Mooladhara, Svadhisthana, Manipura, Anahata, Ajna, and Vishudha.

Muladhara is found between the anus and penis, at the base of the spine. This chakra is where the three main nadis divide and begin their movement upwards. It is assumed that Dormant Kundalini rests here, wrapped three and a half times around the black Svayambhu linga, the lowest of three obstructions to her full rising (also known as knots or granthis). 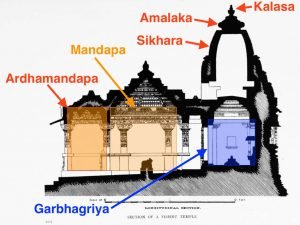 The Svadhishthana Chakra lies between the coccyx and the sacrum about three centimeters above the Muladhara Chakra. It marks the second level of human evolution. The Muladhara Chakra, as mentioned earlier, is the storeroom in which our perceptions and our Karmas lie. These Karmas are now triggered in the Svadhishthana Chakra, and it is here that we have the opportunity to purify them. While our shortcomings and errors are located in this Chakra, it is here that a valuable opportunity is being provided to grow our human consciousness to a higher level. Through the work on the Svadhishthana Chakra, we are able to control, turn and eventually conquer our baser instincts.

We are not victims of our history or external forces ‘ “puppets,” but rather, here and now, we are building our own destiny. In order to be able to do this actively, it is important that we question and honestly assess our values and motives, and then consciously steer them towards the positive. Once we become aware of what is being fed into our subconscious, we can better understand our motives and actions and identify the connection between action and reaction. In this way, we can predict the effects of our actions, and we can affect our future by modifying our behavior. We can then beneficially shape our future and help our own growth.

After we have passed through the stages of the unconscious and subconscious – the Chakra Muladhara and the Chakra Svadhishthana – our consciousness reaches the third level, the Chakra Manipura.

The Anahata Chakra is situated in the heart area, in the middle of the chest, and for this reason, it is also known as the Heart Centre. And it is not without justification that the heart is considered the sign of devotion, for love is the seat of the Anahata Chakra. The Anahata Chakra is our inner temple, in which resides the divine Atman, the “flame of life.” Self-realization, also known as God-realization, requires our own self-recognition, the Atman. We spontaneously point to the center of the chest, the location of the Anahata Chakra, to indicate that something belongs to us or concerns us. No-one points to the body’s head, stomach, or any other part. This clearly shows that within the heart center, we instinctively associate with the Atman.

The Vishuddhi Chakra is located near the Larynx–and thus is also known as the Throat Chakra. It is a source of spiritual and physical purification. With the aid of the Vishuddhi Chakra, we will rid ourselves of the toxic substances as well as mental impurities that are absorbed from the environment. A significant and life-supporting purpose of the Chakra is to purify and detoxify harmful substances that accumulate in the body and that come mainly from the food we eat and the air we breathe. Just as Lord Shiva neither spat out the poison nor swallowed it, so we shouldn’t swallow our problems as we hurt ourselves by it; but we shouldn’t spit them out as this can cause another kind of damage. Like Lord Shiva, who removed the poison in his throat, with the aid of the Vishuddhi Chakra, we can solve our problems too.

The creation of our knowledge and humanity is completed in the Ajna Chakra, and we cross the path to Divine Consciousness. It is found at the upper end of the spinal column, at the transition point between the spine and the brain. Nevertheless, the radiation is mainly perceptible between the eyebrows in the middle of the forehead. So it’s also known as the “Eyebrow Middle” or “Third Eye.” Another phrase of the Ajna Chakra is “Guru Chakra-The Master’s Chair.” The Guru reflects the fundamental, spiritual concept that takes us from darkness to light–meaning from ignorance to knowledge, from death to immortality. We don’t need to dig for truth; it’s always before us. But a person needs a free, pure consciousness and clear thoughts to realize it. Though our mind remains blurry, we see everything hazily and unclearly, like a dirty mirror! Jnana-wisdom and spiritual knowledge-can be extended only in a pure mind and mature consciousness.