Among the arupadai veedu or holy shrines dedicated to Lord Murugan, Swamimalai is fourth. Here, the presiding deity demonstrated to his own Father Lord Shiva Himself the meaning of the Pranava mantra OM.

Mythology says St. Bhrugu had the blessing that anyone who disturbs his mediation would lose all his wisdom before starting an arduous tavamor penance. Such was the power of penance that the sacred fire emanating from the saint’s head reached to the heavens, and the fearful devas surrendered to Lord Shiva in prayer for his grace. The Lord extinguished the holy fire by placing a hand over the saint’s head. With the penance of the saint thus disturbed the Lord was ignorant of all his wisdom and is said to have recovered them by learning Lord Muruga’s Pranava mantra at this shrine. 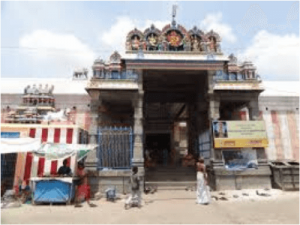 Once when Brahma, the lord of all things, went to Kailasa, he was asked by the ever-playful boy Lord Muruga for the significance of the Pranava OM. Brahma acknowledged his ignorance and the Lord imprisoned him. Everything things came to a standstill with Brahma imprisoned and the devas prayed to Lord Siva to get Brahma out. As Muruga insisted on the imprisonment being a fair punishment for Brahma’s stupidity, Lord Siva asked him if he knew the significance of the primordial Pranava OM himself. Lord Muruga said he understood OM’s meaning and can only describe it to the latter if he can acknowledge him as a mentor and listen as a devoted disciple to the exposition. The location came to be known as Swamimalai and the presiding deity as Swaminathan, as Lord Shiva acceded to Lord Muruga’s plea and heard OM’s presentation as a disciple.

The Architecture of Swamimalai Murugan Temple

In Swamimalai, Muruga is regarded as “Swaminatha Swami,” and “Balamurugan.” The temple is built on an artificial hill. Such an artificial hill is called “Kattu Malai” in Tamil. The word for “Thiruveragam” is The temple has 3gopuram (gateway towers) and 3 parts. One of the three precincts is situated in the basement, the other at halfway to the top of the hillock and the third at the hillock, around the Swaminathaswamy shrine sanctuary. There are 60 phases, and each is named after the 60 Tamil years. The first thirty steps lead to the second temple precinct. The Swaminathaswamy image is 6 ft (1.8 m) in height.

To Swaminathaswamy there are golden armors, golden crowns, and a diamond lance. Outside the first precinct is a shrine of Vinayagar. The central shrine holds the Swaminathaswamy granite image. The first precinct has Swaminathaswamy’s images of Dakshinamurthy, Durga, Chandikeswarar and the festival shot. Sundaresawar’s images as the lingam (Shiva) and Meenakshi (Parvati) are situated down the hill and Dakshinamurthy, Durga, Chandikeswarar, and Navagrahas are the first precinct around their shrines. The second precinct and the temple’s main one contains a marriage hall and temple chariot. The temple is one of the district’s most-visited temples. 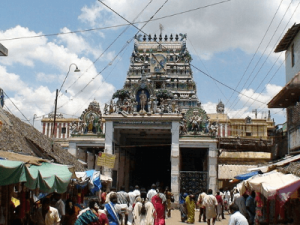 10 Day Tirukarthikai festival November-December is an important temple drawing crowd festival in lakhs. Other festivals held in the temple are Chithirai Brahammotsavam in April-May, Vaikasi Visagam in May-June, Aavani Pavithrotsavam in August-September, 10 day Navaratri in September-October, Aipasi Skanda Sashti in October-November, 10-day Margazhi Tiruvadirai in December-January, Thai Poosam in January-February, Panguni Valli Kalyanam in March-April. Of these, the festivals which fall in the months of Chithirai, Karthikai and Thai Tamil will be inaugurated with flag hoisting. Tirupati festival is celebrated on the day of the English New Year for the steps. In the temple are also devotionally observed monthly Kruthika star days, monthly Tamil new days, New Moon and Full Moon days, Sashti days, Visakam star days, Tamil and English New Year days, Deepavali, and Pongal. The temple crowd is massive on Tuesdays and all the days of the festival.

How to Reach Swamimalai Murugan Temple

Thiruverakam, popularly known as “Swamimalai,” is situated on the northern banks of the Cauvery River eight kilometers away from Kumbakonam in the Thanjavur district. It is one of six prominent abodes dedicated to Lord Muruga (also spelled Murugan) (Arupadaiveedu). Lord Muruga taught the “OM” mantra of Pranava to Lord Shiva and that is why it is called “Swaminathan.”

The temple is built on an artificial hill, and a flight of steps reaches it. The sixty steps of the temple which ascends to the sanctum sanctorum are believed to reflect the sixty months of the ancient Tamil calendar. At the foot of the hill, Lord Shiva is known as “Sundaresan” and the Devi is known as “Meenakshi.” 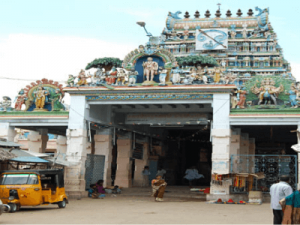