“Sri Vidyashankara temple, Sringeri, hill town and Taluk headquarters located in Chikkamagaluru district in the Indian state of Karnataka. It is the site of the first maṭha (Sringeri Sharada Peetham) established by Adi Shankara, Hindu theologian, and exponent of the Advaita Vedanta philosophy, in the 8th century CE. It is located on the banks of the river Tunga.

One of the highlights of this place is the Vidyashankara temple in Sringeri, near the Sharada Peetham. Sringeri is the site of one of Adi Shankara’s original Advaitha Mathas. It has an ongoing tradition and eighth-century history recorded. The first head of this matha was the disciple Sri Adi Shankara Sureshwarachrya. 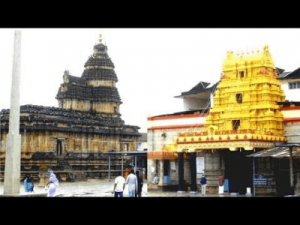 The continued lineage of the Sringeri Matha is traceable through various records. Vidya Shankara or Vidyathirtha and his disciple Vidyaranya are two of the most famous Pontiffs of this matha.

Vidyaranya is a legendary figure in Karnataka culture, and in South India as well. His reign saw the start of southern Muslim incursions. Vidyaranya was instrumental in helping the Harihara and Bukka brothers build the Vijayanagara Empire which served as a fortress to protect Hindu traditions and temples from the tidal wave of northern Muslim invaders.

It is believed that Vidyaranya had inspired the Harihara and Bukka brothers to have a temple constructed over his Guru Samadhi, Vidyathirtha. This temple is called the Temple of Vidyashankara.

The architecture of Vidyashankara Temple

Built around Vidyathirtha’s Samadhi, this temple is beautiful and interesting, and has a slight resemblance to an old chariot. This blends Dravidian-style general features with Vijayanagara-style. This temple sits on a richly sculpted plinth and has six doors. Twelve pillars surrounding the mandapa with figures from the twelve zodiac signs. These are so ingeniously built that the sun’s rays fall upon each pillar in the chronological order of the Hindu calendar’s twelve months. Each column is surmounted by a Yali with a stone ball rolling in its mouth.

Inside the temple, a circle with lines corresponding to the shadows cast by each pillar is drawn on the floor. Five shrines are in here. The central shrine has a Shiva Linga over Sri Vidyashankara’s Samadhi and is named Vidya Shankara Linga. The remaining shrines are for Brahma, Vishnu, Shiva, Durga. A magnificent square vimana overhangs the Garbhagraha. 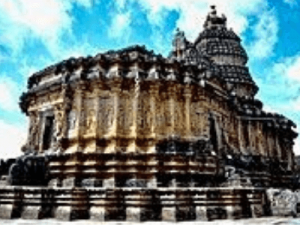 This temple also houses a damaged Sharadamba sandalwood statue, believed by Adi Shankara Himself to have been placed in the Sharadamba temple. This idol was destroyed during the Muslim invasion, it is believed, and Sri Vidyaranya had the new Sharadamba Gold statue built in its place.

How to Reach Vidyashankara Temple

Sringeri, a hugely important place of pilgrimage, is linked to most places in Karnataka by bus routes. Mangalore town is also nearby, and from there you can take buses and trains to Mangalore and you can get to Sringeri.