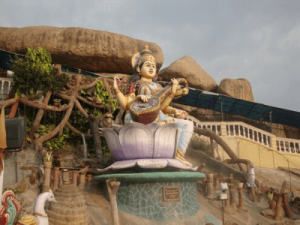 The temple in the village of Vargal is about 48 kilometers from Hyderabad. Wargal has a famous temple located in Sri Vidya Saraswathi or a pictorial background in which there are a unique rock formation and a valley around this hill. Here is a temple dedicated to Lord Shani separately with a large statue about 3 feet high, which is one of the lord Sheni’s largest statues in Telangana.

The hillock of Wargal has multiple temples on the same hill.

This temple complex was Sri Yamavaram Chandrashekhara Sharma’s brainchild schooled Saraswathi astrologer goddesses follower and a huge specialist. He has multi-faceted operations to his name as a businessman. Under the community, which called themselves Satya param Seva Samithi, the building process for the above temple was triggered in 1998. This committee has begun to look for a suitable place to build a temple. 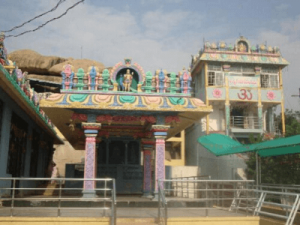 Finally, they chose Vergal’s hillock where Shambu Deva Temple was situated 400 years old. This temple is 2 feet below ground level and in order to reach the main Shiva lingam, one has to pass the ground crawling for a few feet. Two ancient Vaishnaya temples were built around this temple, during or before the Kakatiya rulers. There’s a big rock Victory Pillar that’s about 30 feet tall. The Victory Pillar has SitaRama Lakshmana’s statues, Lakshmi’s goddesses and a number of snakes that are intertwined.

The Bhoomi pooja was held on Vasantha Panchami in 1989 and the foundation stone was laid for Sri Saraswathi Devi’s temple. On this day it should be noted that they only had Rs. 2700. When they began to propagate about the process of building Saraswathi Temple, donations poured in like a flood. With the aid of Lord Saraswathi, the construction process proceeded without hindrance.

Magashudda Trayodashi Pushpagiri petadipate Sri Vidya Nrusinha Bharati Swamy laid the foundation in a temple for the statues of the goddesses Sri Vidya Saraswathi Devi and the statues of Lord Shani. This temple was later dedicated to Kanchi Petam, and in 1999, Sri Shankara Vijaya Saraswathi of Kanchi Petam opened a Vedic Patashala, and in 2001, Lakshmi Ganapathi was inaugurated. The Expenditure for the construction of this temple crossed 1 crore of rupees. The temple has 13 and a half acres of land on the east side that was planned as a park, library, hospital in its future expansion. 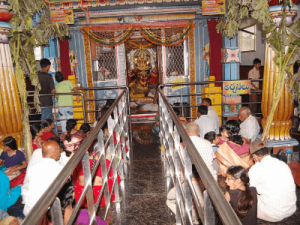 Every day in the temple complex, 100 people were given free food to come and visit the temple in a large dining hall. Every day, 1000 devotees visit the temple during the Dussehra era. The temple of Dussehra ends with Vigneshwara Pooja. Maha Abishekam Navaratri Kalasha Sthapana Chathu Sha shiatsu pachanga pooja is done, Arathi, Mantha Pushpam, Kukumarchana. Laksha pooja Archana Pustaka Roopini Saraswathi Pooja Ashtothara Shathakalasha Abishekam The goddesses Saraswati is decorated for devotees on the last day of Vijayadarshanam.

On every Shani Trayodashi that comes for Saturday, Pooja for Lord Shani Special pooja will be performed. Lord Shani’s poojas began at 5 a.m. Homam will be performed with Tarpana to Lord Shani in the morning starting with Ganapathi pooja and Japam. The Lord Sheni, called Taila Abishekam, will be worshiped with oil. The Homam for Lord Sheni will be finished with Poornahuthi, Arathi, etc. at 12:00 noon, this is a very big event for this temple that attracts 1,000 devotees from all over A.P and elsewhere in India.

Some special poojas performed at the temple of Vargal Saraswathi are Chandi Homam, which here is a special event.