This ancient temple that exists from the dynasty of Chola is a house for Sri Lakshmi Narasimha. This is one of the few temples where every day Garuda-Lord Vishnu’s carrier is also worshipped. Lord Narasimha ‘s beautiful Deity here is facing West in a standing posture. To a large extent, the pattern in temples of Lakshmi Narasimha is that the Deity would be in a seated role and face east. This God, however, has set an entirely different pattern.

Shuka Muni is said to have practiced rigorous tapas here beneath a tree of Badri where the present temple is located. Sri Lakshmi Narasimha, pleased with the penance shown by Shuka Muni, appeared before him and gave darshan in a standing posture. Therefore the Deity is placed inside the sanctum sanctorum, where Shuka Muni had darshan, in the standing posture. Here the Lord gives darshan with Shankha, Chakra, Abhaya Hasta, and a hand pointing to His lotus feet asking devotees to submit to Him. 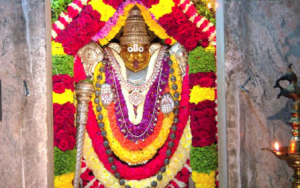 The temple celebrates numerous festivals on Purva Phalguni Nakshatra in the month of Phalgun, among which Brahmotsava is celebrated with great grandeur and zeal. Brahmotsava is celebrated over an 11-day period involving flag hoisting, carrying the temple Processional Deities on special vahanas (chariots) such as – Hanuman Vahana, Gajavahana, Shesha Vahanotsava, Surya Vahanotsava, Garuda Vahana, and Hamsavahana Utsava. Kalyanotsava also performs in the temple– Sri Narasimha’s celestial marriage ceremony with his consort Lakshmi Devi during this festival and on the closing day Avabrutha Snana will be held where all the devotees present will have the opportunity to dip in the temple pond and the festival will be wound up by lowering the festival flag. Besides this, the temple also celebrates Garuda Jayanti, Krishna Janmashtami, and Varamahalakshmi Puja in the month of February.

The nearest airport to Tumkur by distance is Bengaluru city’s Kempegowda International Airport, which is about 90 km away. The closest railway station is railway station Tumkur. By Tumkur, the temple is accessible by road about 25 km away.