Simhadri or Simhachalam Temple is a Hindu temple located in the suburb of Simhachalam town of Visakhapatnam in Andhra Pradesh, South India. It is dedicated to the Vishnu incarnation (avatar) Narasimha (the man-lion). The central shrine’s architectural style is the Architecture of Kalinga.

It is not known the exact age of the Simhachalam Temple, but it contains scriptures belonging to the Kingdom of Chola king Kullotunga-I from 1098-1099 A.D. Another ancient text shows the picture of a queen of the eastern Ganga of Kalinga, and yet another inscription indicates that sometime around 1267 AD the eastern Ganga king of Orissa Narasimha Dev constructed the principal sanctum. As many as 252 texts have identified the predecessors of the Simhachalam Temple in Oriya and Telugu, therefore the building of this mighty facade can not be explicitly attributed to a single entity. 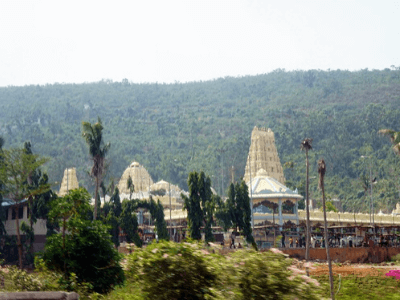 It is believed that after defeating the Gajapati ruler of Orissa Gajapati Prataparudra Dev on two different accounts, Sri Krishnadeva Raya had visited the temple twice around 1516 AD and 1519 AD. The temple at Simhachalam still contains inscriptions left here by the Vijayanagara empire’s Sri Krishna Devaraya. 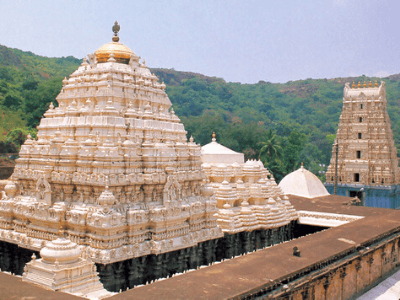 Hirankashyap prayed unceasingly to Lord Brahma and received a blessing that made him free from death by day or night, either in the morning or in the evening, and either by a human or a beast. However, Hirankashyap’s son Prahalad turned out to be a devout Vishnu worshipper who angered the demon king to no end. Hirankashyap had pushed Prahalad off the Simhadri hill, at which point Lord Narasimha appeared, saved Prahalad, killed Hirankashyap and ended his tyranny, as a last resort to kill him. Prahalad eventually built the Simhachalam Temple dedicated to Lord Narasimha, believed to be the same one that stands here today.

The architecture of Simhachalam Temple

This temple has a square sanctum supported by a tower, a front porch with a smaller tower above it and a pillared sixteen mandapam. Overlooking this is the verandah, all made of dark granite carved from the Vaishnavite Puranas with traditional floral ornamental designs and scenes. Also, the verandah houses a statue of a chariot driven by a horse. Outside the inner enclosure is the marvelous natyamandapam, where the rites of marriage performed by God. This is supported by 96 black stone pillars arranged in 16 rows each bearing unique and amazing stone carvings. An ancient masterpiece, this temple itself is worth a visit because of its architectural details. 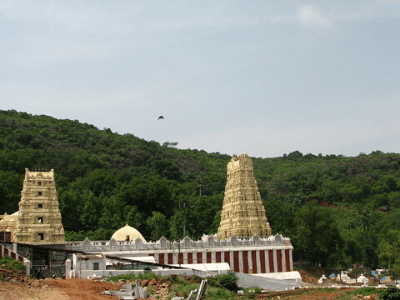 How to Reach Simhachalam Temple

Getting to Visakhapatnam’s Simhachalam Temple is easy for locals and tourists alike. Located just 20 km from the heart of the city center, the temple offers various transport options for your convenience.

By Air: To reach Simhachalam Temple in the least possible time, it is recommended to board a direct flight from the major cities of India. Domestic flights such as Air India, IndiGo, Spice Jet, Air Asia, and Alliance Air are operational from here. For international travelers, international flights to Singapore, Dubai and Kuala Lumpur have also started.

By Train: If you are starting directly from Visakhapatnam Railway Station, you can either opt to travel by Bus (6A) or simply hire a private taxi from the list of top car rental companies in Visakhapatnam to experience a more comfortable journey. The railway station connects the neighboring towns and cities by serving regular trains from Mumbai, Hyderabad, Chennai, Bangalore, Kolkata, and Delhi.

By Bus: Also known as the 3rd largest bus stand complex in Andhra Pradesh, Dwarka Bus Stand offers the facility of a local bus service to and from the temple on an everyday basis. You can catch the bus number 6A or 40 to reach your destination. For all those who are staying somewhere close to Gajuwaka, the local government runs the Bus number 55 and from Maddilipalem, it is 540 to make a visit to Simhachalam Temple.

Places to visit near Simhachalam