The Somnath temple in Prabhas Patan near Veraval in Saurashtra on Gujarat’s west coast, India, is the first of Shiva’s twelve Jyotirlinga shrines. It’s an important tourist and pilgrimage spot. Because of the various legends related to it, the temple is considered sacred. Somnath means “Soma’s God,” Shiva’s epithet. 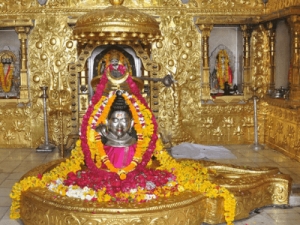 The Temple of Somnath is regarded as the Eternal Shrine. This ancient temple was destroyed and rebuilt several times, respectively, by Islamic kings and Hindu kings. It was restored most recently in November 1947, when Vallabhbhai Patel visited Junagadh’s integration area and mooted a reconstruction proposal. The reconstruction began under Kanaiyalal Maneklal Munshi, another Indian government minister, after Patel’s death.

The temple is open from 6 am to 9 pm on a daily basis. There are three aartis daily; 07:00 in the morning, 12:00 in the morning and 19:00 in the evening.
It is also believed that this is the location where Krishna on earth finished his rainbow and left for his heavenly house.

In 1656, the Mughal emperor appointed Patuli’s Raghab Dattaroy as the zamindar of an area comprising the present-day Bansberia. Legend has it that a bamboo grove was cleared by Raghab’s son Rameshwar to create a fort, inspiring the name Bansberia. 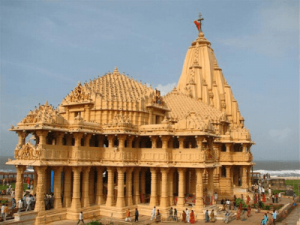 Since ancient times, the Somnath site was a pilgrimage site because it was a Triveni Sangam (the union of three rivers— Kapila, Hiran and the legendary Sarasvati River). It is believed that Soma, the god of the Sun, lost his luster due to a curse, and at this location, he bathed in the Sarasvati River to restore it. The result is the moon’s waxing and waning, undoubtedly an allusion to the waxing and waning tides at this location on the seashore. From this custom comes the name of the town of Prabhas, meaning luster, as well as the alternate names Someshvar and Somanath (“the lord of the moon” or “the moon god”).

The architecture of Somnath Temple

The new temple is designed in the temple architecture style of Chalukya or “Kailash Mahameru Prasad” style and represents the skill of the Sompura Salats, one of the master masons of Gujarat. The śikhara temple, or central spire, is 15 meters high and at the top, it has an 8.2-meter long flag pole. 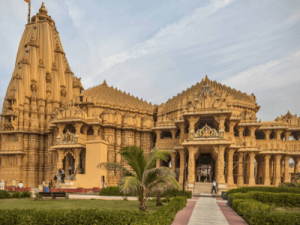 The temple is situated in such a position that there is no land in a straight line between the seashore of Somnath until Antarctica, such an inscription is found in Sanskrit on the Bā hanging on the wall of the sea-protection. The Bā umastambha states that it stands at that specific longitude at a point on the Indian landmass which is the first point on land in the north to the south pole.

How To Reach Somnath Temple

By Air: You can fly to Diu Airport and then you can rent a cabin or catch a bus to Somnath from there. Diu Airport is about 65 kilometers from Somnath.

By Rail: The nearest railhead is at Veraval, which is at a distance of 6 km from Somnath Temple. You can catch a train from Ahmedabad to Veraval Junction.

By Road: Located at an approximate distance of 415 km from Ahmedabad, Somnath Temple is easily accessible by road. 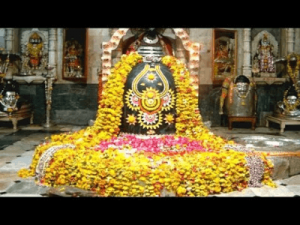 Nearby Places to visit near Somnath Temple