Ayodhya town is an important Indian pilgrimage place for Hindus. It is one of India’s seven holiest cities. Ayodhya is Lord Ram’s birthplace and is a major deity in the Hindu pantheon. This small, quiet city draws pilgrims from around the world. Hindu pilgrims visiting Ayodhya during festivals and important religious functions find it very auspicious to have a holy dip on the sacred Saryu River.

The city of Ayodhya was the capital of the ancient Ayodhya kingdom, where Lord Ram was born. It is also mentioned in the Ramayana and Hindu mythology. Atharvaveda’s ancient scripture describes Ayodhya as ‘a god-built city’ and compares its wealth to the paradise’s glory and splendor. Babur, the Indian founder of the Mughal Empire, founded a mosque at Ayodhya. It was a part of the great Mughal Empire and for many years it was ruled by them. It was a part of the tribal-state of Awadh after the fall of the Mughal Empire which was later conquered by the British. 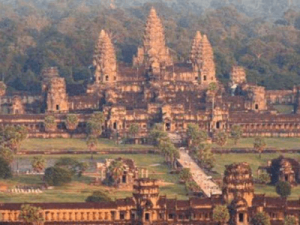 Ayodhya’s biggest tourist attraction was the Babri Masjid (Mosque), built by Mughal king Babur. Unfortunately, this statue can no longer be seen by the tourist, because it was destroyed in the 1992 riots here. It is said that there are 7000 temples in Ayodhya but there are only 100 temples of relative significance. Near to the remains of the Babri Masjid, the traveler will see the shrine of Ram Janmabhumi (Lord Ram’s birthplace). Lord Ram is thought to have spent most of his infancy here. Other places to visit in Ayodhya are Lakshman Ghat, the temple of Kala Ram and the temple of Kanak Bhavan, built in the 19th Century. Ayodhya has many Jain shrines. One kilometer east of the shrine at Ram Janmabhumi is Hanumangadhi (Hanuman Fortress, Lord Ram’s respected monkey god and friend/devotee). It’s said Lord Hanuman was staying in a nearby cave to protect the Ram Janmabhumi. 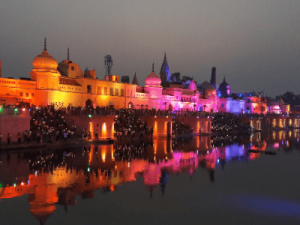 Ayodhya is situated in the northern part of India, in the middle of Uttar Pradesh state. It is a part of the vast northern plains and is situated on the southern bank of the Saryu River. Ayodhya is a tropical climate. The summers are hot (April-June), and the winters (November-February) are cold. In July-September the southwestern monsoon rains reached Ayodhya. Ayodhya has situated 130 km to the east of Lucknow and 6 km to Faizabad.

While Ayodhya’s weather is generally mild with hot spells in the summer (April-June), traveling here during the winter months is advisable.

How To Reach Ayodhya Temple

By Rail – There is no railway station in Ayodhya and one has to go to Faizabad to catch the trains. Lucknow, Allahabad, and Gorakhpur link with Faizabad by rail. We will also supply you with all Indian tourist permit vehicles for local and intercity drives as well. 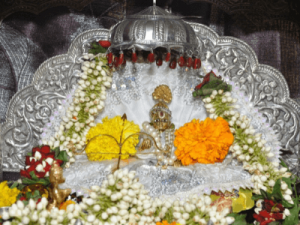 Faizabad has situated 6 km from Ayodhya. It was once the capital of Awadh’s regional empire and has some monuments that belong to that dynasty.