Shree Siddhivinayak Temple is a historic place of worship in Mumbai, dedicated to the Lord Ganesha. The more than 200-year-old shrine is one of India’s richest temples and is frequented by celebrities, Bollywood actors, politicians and commoners alike. The popular belief is that Siddhivinayak Ganapati will satisfy the wishes of anyone who prays with a true heart at this temple. No wonder, travelers visiting Mumbai always make it a point to give their prayers in this Ganapati temple, which is also a top attraction for tourists in Mumbai.

The Siddhivinayak Temple traces its history back to the year 1801 when a man named Laxman Vithu originally founded it. A wealthy, childless woman named Deubai Patil financed the construction of the shrine with the expectation that Lord Ganesha would grant the wishes of other women who haven’t had a child yet.

The original temple was a small brick building measuring 3.6 m * 3.6 m2. The structure was decorated by a dome-shaped shikhara and a black stone idol of Ganapati was installed inside it, which remains intact even today. According to local legends, Ramakrishna Jambhekar Maharaj (who was an ardent follower of the Hindu saint Akkalkot Swami Samarth) buried two idols in front of the Siddhivinayak idol according to his guru’s instruction. As Swami Samarth foretold 21 years later, at the place where these two idols were buried a Mandar tree rose. The tree on its branches had an image of Svayambhu Ganesha.

A small shrine dedicated to Him was also added to the temple compound when a Hanuman idol was discovered during a road extension work in 1952. The fame and local lores associated with that temple spread far and wide over the years. The shrine underwent a massive renovation in 1990 at the cost of 3 crore Indian rupees which transformed a 200-year-old, modest shrine into one of Mumbai’s most eye-catching and grand temples. 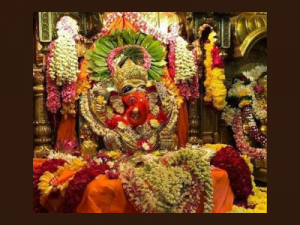 The architecture of Siddhivinayak Temple

An architect named Sharad Athale designed the present-day structure of Siddhivinayak Temple, Mumbai. Although the deity’s idol was kept intact, a makeover was given to everything else about the temple. As a result, the old temple was replaced by a uniquely designed six-story structure. This new structure is crowned with a Kalash plated in gold above the central dome.

Apart from this, the temple structure is adorned by 37 other smaller golden domes. The shrine was reconstructed using fine marble and rose granite. There are 3 entrances leading to the interior of the temple. The temple’s wooden doors show exquisitely carved depictions of the eight embodiments of the temple’s presiding deity, known as Ashtavinayak.

The Deity and Idol

The Siddhivinayak Temple idol is made from a single piece of black stone. It shows Lord Ganesha to be chaturbhuj or to have four hands, holding in each a garland of holy beads, a lotus, a small ax, and a modak plate. Lord Ganesha’s two consorts, Siddhi and Riddhi, are positioned on either side of the Ganapati idol. A third-eye is etched on the idol’s forehead, which resembles that of Lord Shiva.

One of the unique features of Siddhivinayak Temple’s main idol, Mumbai, is that Lord Ganesha’s trunk tilt is to the right. Many of the country’s Ganapati idols have their trunks bent to the left.

The temple can also be reached by taking local trains (Central, Western, Harbour) and getting to Dadar. You may either take shared cabs or regular taxis from Dadar Railway Station to get to Prabhadevi. In general, people choose to walk from the station to the temple, as it is just 15 minutes away.

Near By Hotels in Mumbai