Murudeshwar is a tiny pilgrimage town on the Karnataka coast, 160 km south of the International Airport of Mangalore. “Murudeshwar” is Lord Shiva’s other name. There are two lovely temples with magnificent sculptures on Murudeshwar beach. This tiny and lovely town is renowned for the second-highest statue of Lord Shiva and Murudeshwar Temple in the world, which has a 20-story elevated Gopura guarded by two concrete elephants in the steps leading inside the temple. 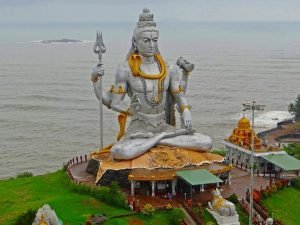 The Temple of Murudeshwar is constructed on Kanduka Hill, surrounded on three sides by the Arabian Sea. This temple is devoted to Lord Shiva and a 20-story Gopura is being built on the temple like all other significant South Indian temples. It is 249 feet high and is regarded to be the world’s highest Gopura. It was built by the businessman and philanthropist R.N. in its current form. Shetty. With the exception of the sanctum sanctorum, which is still dark and maintains its composure, the Murudeshwar Temple is completely modernized.

The enormous towering statue of Lord Shiva is also noticeable from afar in the temple complex. The statue is 123 feet high and the construction took about 2 years. The idol is intended in such a way that it immediately receives sunlight and therefore appears sparkling. The statue originally had four arms and was decorated with gold. However, one of the weapons blew off powerful gusts from the Arab Sea, and the rain dissolved the paint.

This magnificent statue of Lord Shiva should definitely be visited together with the Murudeshwar Temple’s highest Gopura in the world. 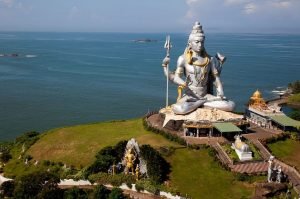 How to Reach Murudeshwar Temple

By Rail: Murudeshwara station lies on the Konkan Railway. Some trains from Mumbai and Mangalore stop here. To reach Bangalore one has to take the train to Bhatkal station.

By Air: Mangalore International Airport, 165 km away. Hubli and Panaji airports are other alternatives.

Maha Shivratri is celebrated with great devotion at the Murudeshwar temple attracting thousands of devotees from all over India.

The story of Murdeshwar Temple

Murdeshwar Temple is located in Murdeshwar town in Bhatkal Taluk of Uttara Kannada district in the state of Karnataka, India. 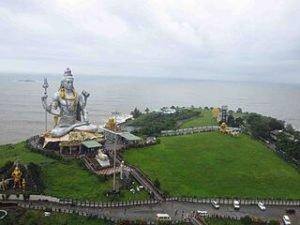 Murdeshwar is famous for the world’s second-tallest Shiva statue. This temple is built on the Kanduka Hill which is surrounded on three sides by the waters of the Arabian Sea. A 20-storied gopura is constructed at the temple. The temple authorities have installed a lift that provides a breath-taking view of the 123-feet Sri Shiva idol from the top of the Raja gopura. Two life-size elephants in concrete stand guard at the steps leading to it. The entire temple and temple complex, including the 237.5-feet-tall Raja Gopura, is one among the tallest.

There are statues of Sun Chariot on side of a park, pool, statues depicting Arjuna receiving Geetopadesham from Lord Krishna, Ravana being deceived by Ganesha in disguise, Shiva’s manifestation as Bhaghirnath, descending Ganga, carved around the hill.

The temple is entirely modernized with exception of the sanctum sanctorum which is still dark and retains its composure. The main deity is Sri Mridesa Linga, also called Murdeshwar. The linga is believed to be a piece of the original Atma Linga and is about two feet below ground level.

Places to Visit Near Murudeshwar