The Shri Ambabai (Mahalaxmi)Temple of Kolhapur in Maharashtra, India, is one of the most famous temples of Hinduism of the state. Kolhapur and the temple are located on the banks of the Panchganga River, it is about 230km south of Pune. 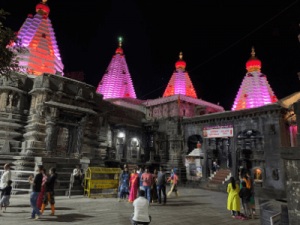 Kolhapur’s Shri Mahalakshmi Temple in Maharashtra, India, is also known as Dakshin Kashi, one of the Shakti Peethas mentioned in various Hindu Puranas. A shakti peetha is identified with Shakti, the goddess of strength, according to these writings. The peetha of Kolhapur is of special religious significance, being one of six places where it is believed that one can either attain salvation from desires or satisfy them. The temple takes its name from Vishnu’s consort, Mahalakshmi, and the divine couple is believed to reside in the city.

Architecturally, the temple belongs to the Kannada Chalukya dynasty and may have been built about 700 AD for the first time. The image of the four-armed and crowned goddess, mounted on a stone platform, is made of gemstone and weighs about 40 kg. The black stone image of Mahalakshmi is 3 feet in height. The Shri yantra is painted on one of the temple pillars. A lion of iron, the goddess’s vahana, stands behind the statue. 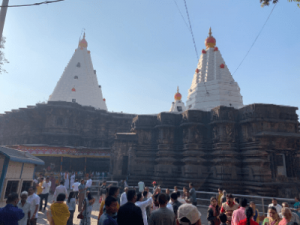 The crown holds an image of Vishnu’s Sheshnag — the serpent. Mahalakshmi’s goddess holds items of symbolic value in Her four paws. A mhalunga (a citrus fruit) is held in the lower right hand, a large mace (kaumodaki) with its head touching the ground, a shield (khetaka) in the upper left, and a bowl (panpatra) in the lower left.

The image of this god looks west (Pashchim) unlike other Hindu holy portraits facing north or east. On the western wall, there is a small open window through which the light of the setting sun falls on the image’s face for three days around March and September 21.

The architecture of Mahalaxmi Temple, Kolhapur

Kolhapur is located in the district of Kolhapur and is well connected to Pune, 240 km north. It’s on the Bangalore-Pune national highway. It is located on the banks of the river Panchganga and is filled with ancient temples and shrines.

How to Reach Mahalakshmi Temple, Kolhapur

Located on NH 4 Kolhapur Pune-Bangalore, it is well connected via the road network. This position is well connected within the state to different destinations as well as those in other states. It includes Karnataka and Goa areas, as well as some Tamil Nadu and Andhra Pradesh regions. From this area, public transport busses regularly fly to Mumbai (379) and Pune (225 km).

Because of the presence of Mahalaxmi Temple and being a famous city in its own right, Kolhapur has its own railway station as an important pilgrimage destination. The railway station of Chatrapati S. Maharaj has trains from various Indian cities like Pune (Maharashtra Express) and Mumbai (Mahalaxmi Exp). Through Bangalore (Ranichennama Exp), Ahmedabad (Ahmedabad Exp), and Tirupati, one can also fly. Besides this, there are also direct trains from Kolhapur to other prominent destinations such as Delhi via Nizamuddin Express.

Kolhapur also has a domestic airport in Ujlaiwadi, 13 km from this city’s central region. It is linked by numerous flights to other prominent destinations in the region. Regular aircraft are available from the city to reach Mumbai, for example, with the journey taking only one hour to complete. Those who want to catch an international flight can either book a connecting flight from Kolhapur or fly to Mumbai just over five hours away.