The history of Jyotirlinga says that once there was a quarrel between Lord Bramha and Lord Vishnu who argued that they were the supreme, to test them Shiva went into three worlds as an endless pillar of light that is the jyotirlinga Lord Bramha lied that he found the end of the light while Lord Vishnu accepted his defeat, then Shiva cursed Bramha that he will never be worshipped in temples and the Vishnu will be worshipped till the end of the eternity.
Mahakaleshwar is also known as the Dhakshineshwara Swami as the idol of Mahakaleshwar is facing towards the South. MahaShivrathri is the main festival celebrated here and thousands of devotees come to seek the blessings of Lord Shiva. 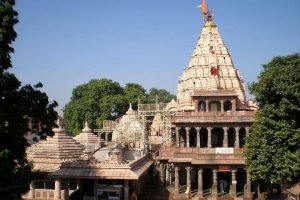 As a great devotee of Lord Shiva, King Chandrasena of Ujjain prayed to him all the time. Once, while he was praying, a farmer’s son, Shikhar, overheard him. The lad wanted to pray with the king, but the palace soldiers threw him out and took him to the outskirts of Ujjain. The boy then overheard Ujjain’s rivals, kings Ripudamana and Singhaditya, talk about attacking the city. He began to pray to the Lord immediately to protect his house. The priest Vridhi heard the news and began to pray to Lord Shiva on the banks of the Kshipra River at the behest of his brothers. He agreed to stay in Ujjain at the behest of Shikhar and Vridhi to protect the city and its devotees. The Lord has resided in his Mahakala form in the lingam from that day forward, and anyone who worships the lingam is supposed to be free from death and disease, and the Lord will bless him for the rest of his life.

Until 1886, major programs of the then Gwalior Riyasat used to take place at this mandir in the rule of Maharaja Shrimant Jayaajirao Saheb Shinde Alijah Bahadur. The Dev Sthan Trust was succeeded by the Ujjain municipal corporation after Independence. It’s under the collectorate today. 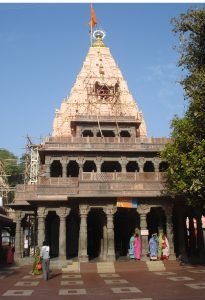 The idol is a Dakshinamurti, meaning it is facing the south. This special feature can only be found in the temple of Mahakaleshwar. In the temple’s western, eastern and northern corners, the idols of Ganesh, Kartikeya, Parvati are installed. The temple has five stages, one of which is underground. The temple is surrounded by high walls and a lake in a massive courtyard. It is believed that it is possible to re-offer the Prasada offered in this temple, a belief not found in any of the other temples of jyotirlinga.

How to Reach Mahakaleshwar Temple

Mahakaleshwar temple is located in the Ujjain town of Madhya Pradesh. Ujjain is very well linked with Indore city and can be reached easily by road and train. Accessibility information is given below:

By Air: Ujjain doesn’t have its own Airport, Ahilya-Devi airport in Indore, is the nearer one which is about 60 km from city Ujjain, this airport has wide domestic & international air connectivity; there are frequent flights for national capital Delhi, Mumbai & other major cities of India.