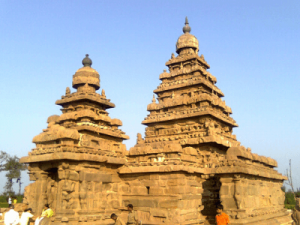 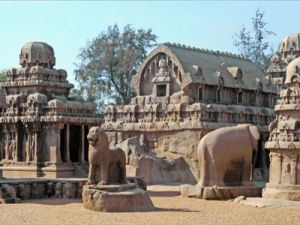 The Adi Varaha Perumal Cave Temple is Mahabalipuram’s oldest, but the least visited, of all Pallava complexes. The magnificence of the real mandapa (pavilion) is concealed behind a later-day frame that looks very ordinary. Before the reign of Mahendravarman I, the construction of this site began. The temple is dedicated to Vishnu (Varaha is an incarnation of Vishnu) and its design follows the spirit of Vaishnava Agamic texts. Both the outer hall and the sanctum are decorated with intricate sculptures in relief. This temple houses two relief sculptures supported by their respective wives by Pallava rulers, Simhavishnu (c. 537 CE – 570 CE) and Mahendravarman I.

How to Reach Mamallapuram Temple

Chennai Airport serves as the closest airport to Mamallapuram. The airport is located around 58 km away from the temple town. Chennai is well connected with rest of India by all major domestic airlines. One can board a direct or stopover flight to Chennai from anywhere in India and then hire a cab to reach the town of Mamallapuram.

Mamallapuram is well connected by the road with the rest of Tamil Nadu. State and private buses ply at regular and frequent intervals from places like Chennai, Pondicherry, Chengalpattu, Kanchipuram, to name a few. Road condition is good and the drive along the coast is quite pleasant. Depending on budget, passengers can avail AC or non AC buses.

The nearest train station to Mamallapuram is Chengalpattu Junction. It connects Chennai and various parts of Tamil Nadu by express and mail trains. On arrival at the station, one can hire a cab to travel a distance of around 29 km to reach Mamallapuram.