Sri Ganesh temple is one of Telangana’s most prominent temples, about 200 years old. Lord Ganesha, whose statue is the temple’s main attraction, is the principal deity. There are six other Sannathis dedicated to different gods and goddesses besides the main deity, namely Lord Shiva, Sri Navagraha, Sri Subramanya Swamy, Sri Anjaneya, Sri Uma Maheshwari, RahuKetu and Maha Ganapathi Mandapam. Daily rituals are performed regularly, and various pujas and offerings are also performed according to the preferences of the devotees. The temple also has an online portal that allows devotees to register for the puja they might want to perform.

The temple is about 200 years old and is one of Telangana’s most famous temples. It is a belief that Lord Ganesha’s idol was discovered by the Madras Regiment of Sepoys in 1824 as they dug a well. This temple was later built with beautiful designs, and the Lord’s idol was installed as the principal deity. The temple, in the combined state of Andra Pradesh, remained unpopular despite its fascinating history and architecture. This was because the Kanipakam Ganesh Temple got the most attention from the government as well as the public. Nevertheless, the temple has been visited by many devotees over the past two decades and is now one of Secunderabad’s largest temples. Also in 1960, the temple underwent an extension. The temple committee chair reported that the temple’s annual revenue is about four crores. 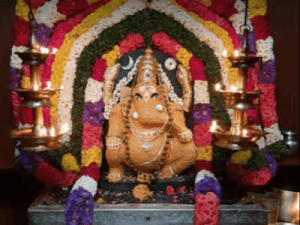 The Architecture of Sri Ganesh temple

The Temple is crowned with an enormous tomb, traditionally called the Gopuram with intricate carvings on it. The temple structure and the idolization are based on Agama Sastra, which makes it all the more significant. The temple architecture denotes Telangana’s rich culture as it is reflective of the Kakatiya dynasty. Lord Ganesha’s idol is unique in that the Lord places his right hand on his leg, and the other hand holds a goad. It’s believed to be the only Lord idol posing in India in such a way. There are seven other Sannathis dedicated to Lord Shiva, Sri Navagraha, Sri Subramanya Swamy, Sri Anjaneya, Sri Uma Maheshwari, RahuKetu and Maha Ganapathi Mandapam inside the temple, other than the Sannithi dedicated to the Lord Ganesha, the principal deity. You can always see the idols decorated with flowers and lights, illuminating the whole Sannithi. Another major attraction is the Rathothsavam or the wooden chariot within the temple. It is used during Ganesh Chathurthi when three temple idols take their place in the chariot and are carried around the city till the tank and brought back after immersing the other idols.

The idol is a beautiful structure of the Lord posing on his thigh with his right arm, another hand holding the Ankusham, his left hand placed on the trunk, and his fourth hand holding a Damarakam with a snake(Nagumpamu). The temple was built with great care given to the Agama Shastras. Many Vrathams(fastings) are done by devotees from all over the country on a regular basis. 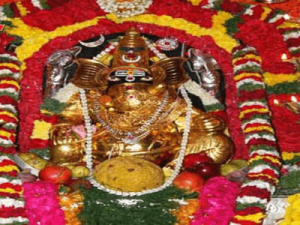 Nitya Kalyanam performs at 11:00 a.m. and Ganapati Homam is performed daily at 8:20 a.m.
The tickets for Archana are INR 10. Archana, Arjitha Sevas, and poojas are special, for which the price ranges from INR 50 to INR 7500. Also distributed are a number of Prasadams like Undrallu, Vadamala, Pulihora, and so on, for which you will each have to pay INR 120.

The temple is in the middle of a busy Secunderabad road and receives many crowds, especially during Ganesh Chaturthi. At that time, Lord Ganapathy’s gigantic idols are made and adorned until the day of immersion. This is conducted as a very grand ceremony with various offerings of bhajans, harikatha, and puja to the Lord. Sankata Hara Chaturthi is another significant day on which most people perform Ganapathi Homam to seek Lord Ganesh’s blessings. Nevertheless, on other days, visiting the temple early in the morning, during which the crowd is less, and a satisfactory darshan is possible, is preferable. The summer high in Secunderabad is in April and May during which it is suggested that the visit be avoided as the city at this time is becoming very humid. In certain months, when the trip can be enjoyed the most, the weather is good or slightly dry.

How to Reach Ganesh Temple, Secunderabad

The temple is at 2.5 kilometers from Secunderabad, in the heart of the city. It is possible to use cars, buses, taxis, and private vehicles to travel to the temple. The temple is just across from Secunderabad Railway Station and Hyderabad is 9 kilometers from the nearest airport. There are also nearby buses available to move around to other attractions.

Places to visit in Secunderabad