Civilizational contiguity, a vivid cultural asset, and a thousand voices screaming into the cerebrum, the Khajuraho Monuments Group is like the last dot in the world of time and space that balances the social structures that match human emotions and sensitivities into a blended aesthetic that has fascinated us all. It’s like a canvas born from the earth, stretched out over blocks of wood that represent and celebrate life in its purest form.

Built by the Chandela dynasty between 950-1050 CE, Khajuraho Temples are one of the most significant Indian art specimens. It took around a hundred years for this set of Hindu and Jain temples to take form. The number originally came down to 25, a total of 85 temples. The temple complex, a UNESCO World Heritage Site, is divided into three spheres: the North, the Northeast, and the South. The western group consists of most temples, the east consists of carved Jain temples, while the southern group consists of only a few temples. During the Chandela rule, the Jain temples were built in the Eastern Group of temples for the flourishing Jainism in the region. The temples are dedicated to various Hindu gods and goddesses in the Western and Southern parts. Of these eight temples, Vishnu is devoted, Shiva six, and Ganesha and Surya one each, while Jain Tirthankaras three. The Kandariya Mahadeo temple is the largest remaining of all temples. 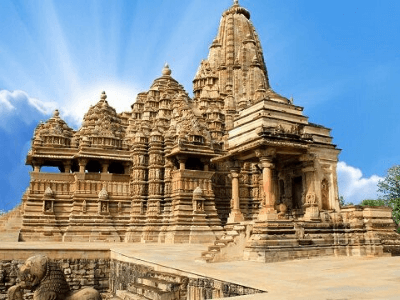 The rulers of Chandela constructed the temples over a period of 100 years, each of which was commissioned by a King. Kings Dhangadeva and Yashovarman had designed the bulk of the temples. The temples were constructed close to Mahoba, which was once the seat of the Chandela empire. The temples were named after the date palm trees which used to be the premises gates back in the daytime. The Khajuraho Temples are best known for their erotic sculptures and carvings, but similar sculptures are to be found at the Konark Sun temple in Odisha. Ironically, these sculptures have many hypotheses regarding their nature and are based on Hindu iconography and are part of the core system of beliefs that focus on the four principles of Hinduism: karma, dharma, kama, and moksha. 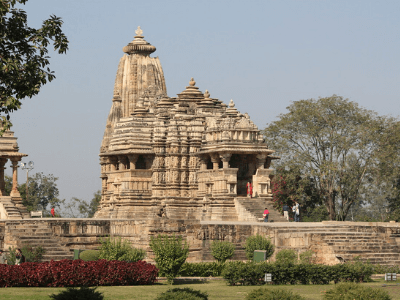 The architecture of Khajuraho Temple

The temples adapt the Nagara-style architectural design aesthetics and are constructed of sandstone and granite. All temples are sun-facing, a common aesthetic found in Hindu temples, except the Chaturbhuja temples. The male and female deity deities show a co-dependence of male and female strength. The temples operate on the simple mandala design which includes a square and circles. The whole precinct is divided into three zones which combine to form a pentagon. The following temples are house in the three zones:

How to Reach Khajuraho Temple

Located in the northern part of Madhya Pradesh, Khajuraho is famous as the Khajuraho temple ground. For this important tourist attraction alone, it attracts a large number of tourists each year. And this is why Khajuraho is easily accessible and has its own airport in close proximity to the city. The easiest way to get to Khajuraho is by car, the town is only a 2-minute drive from the airport. Otherwise, you could take a bus from Chhatarpur. Khajuraho town lies 44 km from Chattarpur district, 281 km from Gwalior, 375 km from Bhopal, 565 km from Indore, 355 km from Ranchi. Khajuraho’s nearest towns are Harpalpur (94 km), Satna (117 km), Jhansi (175 km), and 258 km away from Jabalpur.

Situated in Chhatarpur district, Khajuraho Railway Station is 5 km from the Khajuraho temple. There are trains from Delhi to Khajuraho, Agra to Khajuraho, Varanasi to Khajuraho and more. Choose from Khajuraho-Hazrat Nizamuddin Express, UP Sampark Kranti Express, Bundelkhand Link Express to reach the town.

Khajuraho Airport is a stone’s throw away from the Khajuraho Temple Complex, a mere kilometer run. It operates flights from Delhi and Varanasi. 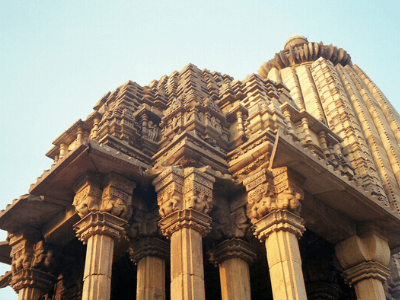 The best time to visit Khajuraho is between October and March, during the winter. If you are culturally inclined then planning your trip to Khajuraho during the annual Khajuraho Dance Festival is important. Every February is held the week-long classical dance festival. A showcase of Indian classical dance styles, if you are an enthusiast or want to enjoy the beauty of cultural performances against the backdrop of the ancient temple, it is a must-attend. Once you schedule your trip book hotels in Khajuraho online.

Best Places to Visit in Khajuraho