Shri Hanuman Mandir, Sarangpur is a Hindu temple in Sarangpur, Gujarat and is under the Swaminarayan Sampraday Vadtal Gadi. This is the only Swaminarayan temple that does not have either the Swaminarayan or Krishna Murtis as the main worship deity. This is in the form of Kastbhanjan (Crusher of sorrows) dedicated to Hanuman.

In the Swaminarayan Sampraday, this temple is among the most prominent. Sadguru Gopalanand Swami had installed the Hanuman image. It’s said, according to author Raymond Williams, that when Sadguru Gopalanand Swami mounted Hanuman’s image he touched it with a rod and the image came alive and moved. This story has become a charter for the rite of healing held in that temple. Hanuman’s illustration here is a muscular figure with a mustache handlebar, crushing a female demon under his foot and baring his teeth, standing amid sculpted foliage full of fruit-bearing monkey attendants. In 1899, Vadtal’s Kothari Gordhandas appointed Shastri Yagnapurushdas to manage the mandir’s affairs; during his tenure, Shastri Yagnapurushdas renovated the site, constructed the adjacent bungalow, and purchased more land to bring the complex to its present state.

The architecture of Hanuman Temple, Salangpur

It is said that the sight of this temple is so strong that a mere glance at it would force the evil spirits out of those afflicted by them. Saturday is the day reserved for a special celebration for those affected by mental disabilities and other conditions (as Saturday is dedicated to Hanuman) They are brought into the temple to be struck by the rod that Sadguru Gopalanand Swami used during the image installation ceremony. Now the rod was coated in silver. A brahmin householder has been hired by the temple administration to act as a priest at the temple and conduct this rite. After that, the affected person is told to circumambulate the shrine and repeat this after having done darshan several times. Some people take a special vow to do this a number of times or recite the Mahamantra Swaminarayan when doing this.

Many of the annually celebrated major festivals include Ram Navmi, Janmashtami, Shivratri, Holi, Ganesh Chaturthi, and Diwali. Diwali is one of the largest Hindu festivals to mark the Hindu New Year, which draws many tourists which devotees to the mandir. 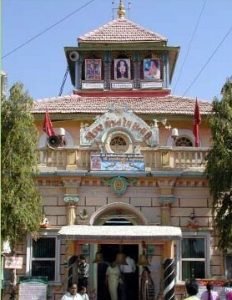