Gnana Saraswati Temple is a Saraswati Goddess Hindu temple, located on the banks of the Godavari River in Basar, Telangana, India. It is one of the two famous Saraswati temples on the Indian subcontinent, with Sharada Peeth as the other. Saraswati is the Hindu Goddess of learning and knowledge. Children are brought to the temple for the ceremony of learning, called Akshara abyasam.

According to Mahabharatha, after the Kurukshetra Battle, Maharishi Vyas and his followers and sage Viswamitra agreed to settle down in a calm, serene atmosphere. He came to the Dandaka forest in the search for a peaceful abode and, satisfied with the region’s serenity, selected this location. Due to the influence of the Marathi language in this region, since Maharishi Vyasa spent considerable time in prayer, the place was then called “Vasara” and transformed into Basara.

This temple is also believed to be one of three temples built near the confluence of the Manjira and Godavari rivers.

Historically, ‘Bijialudu’ a king of Karnataka, who in the sixth century ruled Nandagiri province with Nanded as its capital, founded the temple at Basara. In the 17th century, after the devastation caused by Muslim invaders, a chief of Nandagiri (Nanded) restored the temple idols. 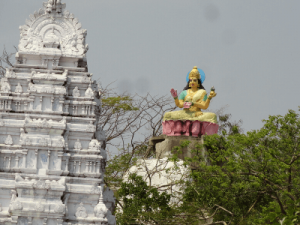