Thillai Nataraja Temple, Chidambaram or Chidambaram Temple is a Hindu temple dedicated to Lord Shiva situated in the town of Chidambaram, East-Central Tamil Nadu, South India. The temple is considered to Saivites as the most important of all temples (Kovil) and has inspired worship, architecture, sculpture, and performance art for over two millennia.

Since the classical period, there have been many renovations and offerings by the royals Pallava, Chola, Pandya, Vijayanagara, and Chera to Chidambaram, a major shrine of Lord Shiva worship in the ancient and pre-medieval times. The temple as it now stands is primarily from the 12th and 13th centuries, with subsequent additions in a similar style.

Temple presiding deity is Lord Shiva. The temple has influenced the Lord’s famous Nataraj form as a celestial dancer, one which has become popular in Hinduism now. In the temple are depicted two other forms of Lord Shiva, as a lingam – the most common representation of Lord Shiva in temples, and as the aether classical dimension of space, depicted with empty space and a garland of fifty-one hanging golden vilvam leaves.

Lord Shiva was strolling through the Thillai Vanam, according to legend, when he saw a party of rishis. The sages believed in sorcery and believed that spells and rituals could influence the gods. Lord Shiva walked through the trees, disguised as a Bhikshatana, accompanied by Vishnu disguised as his consort, Mohini. The sages and their wives were pleased to see the magnificent and beautiful mendicant and his consort. On seeing their wives pregnant, the sages were angry. They sent upon the mendicant a volley of snakes, conjured up with sorcery. Lord Shiva had just laughed and covered his neck and chest with the serpents. The sages then continued to give the mendicant a fierce bear. Lord Shiva just killed the tiger and covered his waist with his fur. Thereupon the sages sent an elephant. This, too, killed the King. The Sages then finally conjured up Muyalakan, the demon. The Lord was just laughing, stepping back on the devils and immobilizing him. Then the Lord performed Anand Tandav on the back of the devil and unveiled his true form. The sages bowed down to the Lord, knowing that the Lord was beyond rituals and sorcery.

The day begins with the head priest purifying himself and adorning the bhava shivoham or the hood shiva. Then the Lord’s padukas are carried to the temple, in a palanquin, followed by loud chants, cymbals, and drums. Afterward, the priest performs the puja. The pujas are done six times a day, every day. The lingam is anointed before each puja with milk, ghee, rice, and sandalwood ash. This is accompanied by offering a selection of food and sweets to the god, and then lighting up a series of lamps. The puja also includes a Vedas and Pancham Puranam recital. The puja ends with the priest leaving the sanctum sanctorum curtains to reveal the Chidambara Rahasyam (sanctum).

For the second puja, a ruby idol of the Nataraja is also anointed, along with the lingam.

The lord’s footwear is carried back in a palanquin after all the pujas are done, along with a procession symbolizing the Lord’s retirement for the night. The whole holy power of the universe is believed to retire for the night along with the Lord. 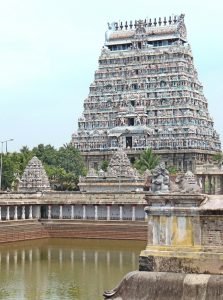 By Road: Chennai to Puducherry (Pondycherry) vila ECR or Chengalpattu Dindivanam headquarters, then Cuddalore, Chidambaram. Path: Transportation by the path in Cuddalore District is very fine. NH45, NH45A national highways pass through Cuddalore. State Highways 32 & 36 passes through the District of Cuddalore, too. Cuddalore is situated on the road 200Km from the headquarters of the state.

Hotels Near By Thillai Nataraja Temple