Will you believe that there is a temple in India where people worship a bullet bike instead of an idol of God? Yes, there is a pilgrimage place established in the Pali district near Jodhpur in Rajasthan, India. Thousands of people used to visit the temple to pray for their safe journey. It’s a miraculous temple where no idol of God is worshipped but a motorcycle is venerated in Shri Om Banna temple. People worship the bike and offer garlands of flowers on it. After all, what is special about this bike, and why do people worship it, Let’s know more about this temple and the history behind this. The story of this temple is very unique.

The pilgrimage place is located at a distance of 20 kilometres from pali and 50 kilometres from Jodhpur on the Pali-Jodhpur highway, near Chotila village. The temple here is known as Bullet baba. It is said that praying here keeps your journey safe. Each day travellers from nearby villages stop here and worship the motorcycle. The motorcycle is a 350cc Royal Enfield Bullet RNJ 7773. Some people pray for the safety of their journey.

Bottles of liquor are drunk in the temple and it is said that the journey of the traveller who does not pray while passing there can be risky. People used to sing folk songs by the name of Om Banna. Many people spread flowers, coconuts, and red cloth, wishing for their safe journey. Let us know more about this temple and the story behind the bullet baba. And even Jain temples are more in Rajasthan.

The history behind this temple

Om Banna was his father’s only child and the whole family’s beloved. Since childhood, he was brought up with great love, and his parents used to fulfil every wish he dreamt of. He was very fond of riding bikes, so as soon as Om Banna grew up, he bought a Royal Enfield motorcycle, it seemed as if his life just revolved around it. Om Banna got married shortly after taking the bike. Imagine when god is a traveler who’s blessing he takes? Anyways he is a god, he should trust himself. When god is a traveler hope all should be fine.

His in-law’s house was not so far away from his village, so he used to leave his village on his bike from time to time. Om Banna had gone to the village to meet his wife and there he stayed till the evening after some time he left for his house. Om Banna took some time returning home, that night the roadway from where he was coming was empty, and he could see very few vehicles on the road, on seeing the empty road, the bike racer inside Om Banna woke him up and he thought that he should take some advantage of the time.

He then immediately increased the speed of the bike. In a few moments, his bike started talking to the air. Om Banna was living this moment with all his heart, that’s why he loved and enjoyed riding his bike at high speed, suddenly there was a turn in front, he then tried to control the speed, but at the next moment his bike was lying on the ground and Om Banna had fallen at a short distance from the spot. 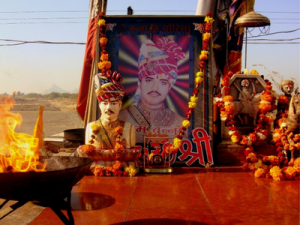 His body became lifeless. Om Banna died on the spot. The next morning the police reached there and simply understood that it was a case of an accident. They took Om Banna’s body to his house and took the bike to the police station. There everyone thought that it was just an open-end case and thereby they did not pay much attention to it and Om Banna’s bike was kept outside the station. The very next day, as soon as the police came back to the station, the bike was vanished, everyone was surprised and had no idea about it.

The people thought that there must be a thief who has cleaned their hands on the bike, so they informed the police. Shortly after, the police were informed that the Royal Enfield was parked in an abandoned condition on the jodhpur pali highway near chotila village, they learned that it was Om Banna’s bike. The policeman went to recover the bike from there. They understood that it can be the work of a thief who has finally left the bike there and taken the bike to the station.

That night the bike remained in the station but the next day again the previous incident happened, they saw the bike left missing again, then they heard the news of Om Banna’s bike was spotted again on the accident site. The police were confused and failed to learn the reason behind the missing bike. The next day they removed all the petrol from the bike and tied the bike so that no one could steal it. Despite their efforts, the bike was missing again in the station, every time it was spotted on the accident site.

How the temple was built

The temple was built by Om Banna’s father Shri Jog Singh who lives in Chotila village, 3 kilometres away from the place. As soon as the news was brought up to the people of the surrounding village, they gave it the name of the miracle, they believed the soul of Shri Om Banna resided in the bike. Om Banna’s father planned to build a memorial as a pooja mandir at the accident site for his son Om Banna to end his series, after which the villagers made a memorial in his name and kept his bike there.

Since that day the bike did not go anywhere. People considered it a miracle and believed that instead of a memorial, a temple should be built there. The specialty of this temple is that there is no idol of God but Om Banna’s bike was worshipped.

Since that day, the temple was built and people visit the temple and worship Om Banna’s royal Enfield bike which is kept in a glass box. People coming from Pali Jodhpur highway come across the temple, stop there and bow their head and pray to the bike and its late owner Om Singh Rathore. Bottles of liquor are offered as prasad in the temple. The story of Om Banna and his temple is very interesting. Anyone who hears about it gets astonished. 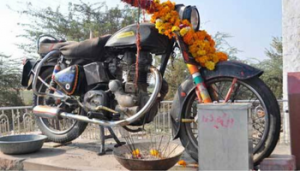 People who pass by the temple bow their head and leave offerings which includes incense sticks, flowers, red thread, coconut, and sweets, and especially, drivers offer small bottles of liquor at the site. Devotees also tie a red thread and apply tilak on the motorcycle and on the forehead of the idol of Om Banna to mark respect and seek blessings. The tree which caused Om Banna’s death is decorated with offerings of bangles and scarves by the people. It is considered a holy tree since every time the motorbike used to return to this incident place again and again from the police station which became the reason for the holy place.

There is an eternal flame burning inside the temple. People queue up to make offerings in honour of the helpful spirit. Devotees offer alcohol when their wishes are fulfilled. Some of the young male devotees open the liquor bottle and pour it near the lips of the idol of Shri Om Banna. Liquor is the main prasad served in this temple.

Timings of the Temple

How to reach Om Banna Temple

Nearby places to visit near this temple

Nearby Hotels To Stay :

1. Hotel Rajputana Heights (650 meters which take only 2 min from the temple) opposite to Om Banna Temple, Pali, Rajasthan- 306421

Shri Om Banna temple is a miraculous temple of the latest God in the Hindu deity Shri Om Banna. The story of him and his motorbike is unusual. In Rajasthan, temples are filled with mysteries and miracles, till today people are surprised and have good faith in these temples, and offerings offered by the devotees show respect towards the idol of God. Om Banna temple is worth visiting once in a lifetime for people’s safe journey.

Added to wishlistRemoved from wishlist 1