Mahashivratri, one of the most important Hindu festivals in India will be celebrated on March 11th this year.  The festival is celebrated almost everywhere in India on a grand scale. Mahashivratri is celebrated as the day on which Shiva married Parvati and Shiva’s devotees ensure that on the 14th day of the Hindu calendar month, Phalgun. Shiva is one of the three gods that form the Hindu trinity in the Hindu pantheon and holds a significant role. The Mahashivratri is the one where people fast through the day and give prayers through the night, even though people pray to Shiva for 12 Shivratris during the year. Here’s a list of the 10 best places to celebrate Mahashivratri.

In honor of the most charismatic, powerful, and interesting god of the Hindu Trinity, Lord Shiva or Mahadev, Maha Shivaratri is a grand and auspicious festival. Mahadev, Bholenath, Shambhu, Shankar, to name a few, Lord Shiva is one of the most venerated deities in the world, known and celebrated by many names! Maha Shivaratri is therefore the most famous Hindu festival celebrated in India!

What is Maha Shivratri?

The Maha Shivratri in India is a wonderful festival. It falls in Phalgun, the Indian month. In February or March, Shivaratri’s date may fall. This one-day festival is observed by the people of India to worship Lord Shiva. So, during the Maha Shivratri festival in India, the temples of Lord Shiva draw many pilgrims. The day is marked by Shivratri Bhajan, fasting, and Shivratri Puja.

There is another Shivratri known as Shravana Shivratri, in addition to the Maha Shivratri, that falls in the rainy season. But, Maha Shivratri’s rituals vary from some of Lord Shiva’s other pujas. In addition, Maha Shivratri is celebrated by Hindus from most of the states in India. This festival, therefore, retains more traditional values than many other Indian festivals.

Why is Maha Shivratri Celebrated?

There are several beliefs among people regarding the Maha Shivratri celebration. One common belief is that it is the celebration of Shiva and Parvati’s marriage. People also enthusiastic to know about what is the difference between Shivratri and Maha Shivratri.

It is absolutely right that, for their own sake, Shivratri and Maha Shivratri are celebrated. Shivratri is celebrated because by holding the blue poison in their throat, which appeared during Samudra Manthan, Lord shiva saves the world. Shiva became ‘Nil Kanth’ after this lord of the incident.

At Prayag Triveni Sangam, Ardh Kumbh Mela is held every 6 years. During Ardh Kumbh Mela, we must visit this place once in our lifetime in order to take a holy dip during Mahashivratri. If you are searching for the best place to celebrate Maha Shivratri, the upcoming Maha Shivratri Shahi Snan is scheduled for 2021. In 2021, Prayag could be the best option for you.

Difference between Shivratri and Mahashivratri:

On the 14th day of the month, one day before the new moon, Shivratri is celebrated, so the full moon that falls on Krishna Paksha’s Chaturdashi every month is only called Shivaratri. Mahashivratri is the most important of the 12 Shivratri celebrated in a year, which falls on the Krishna Chaturdashi of Falgun month, usually celebrated in February or March, depending on the planetary location.

While Mahashivratri is celebrated joyfully in almost every state of India. Here are the 15 best places to celebrate Maha Shivratri are below. 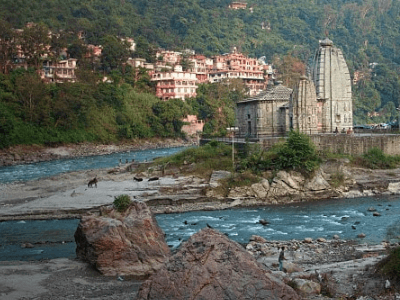 Mandi is situated in the Eastern Himalayas, a sacred hamlet. Although Maha Shivratri is celebrated throughout India, one of the oldest places to commemorate Maha Shivratri is Mandi! It is believed that the festival in Mandi began during the reign of Ajbar Sen in 1526, when Mandi was founded (1499-1534).

To this day, living up to its legacy, nearly 200 idols of deities are carried from hundreds of other temples to the Bhoothnath temple (the most visited Shiva temple in Mandi) for the seven-day Mahashivaratri festival, attracting tens of thousands of Hindu devotees from Himachal Pradesh and around. 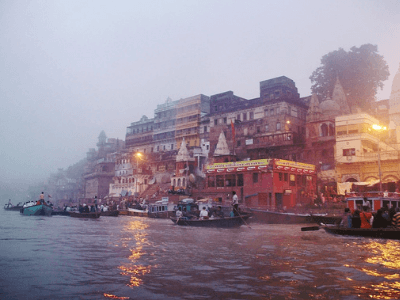 The feast of Maha Shivratri in Varanasi’s Vishwanath temple is unrivaled across India with its pompous celebrations and joyful mood. During Maha Shivratri, Hindu adherents from all over the country and foreign tourists from around the world alike feel a magnetic pull and frequent the area.

According to legends, Mahashivratri is considered to be the union of Lord Shiva and Parvati, so, trained performers play the role of Lord Shiva and Goddess Parvati and parade around the city, giving the people their blessings. In the morning, the ritual begins fresh and ends at the temple of Tilbhandeshwar. In addition, devotees smoke marijuana (bhang) and dance as a holy river in the procession. 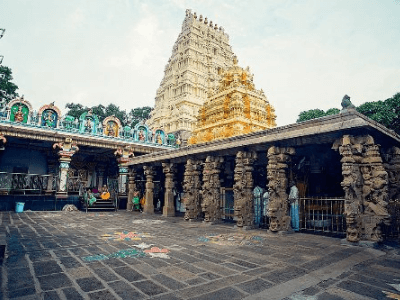 Srikalahasti and Srisailam, renowned for their Shiva temples, draw tens of thousands of Hindu devotees from around India to celebrate Mahashivratri. These famous temples of Shiva observe long lines of devotees for the rituals of Aarti and pooja. In memory of Lord Shiva, devotees also give prayers, chant mantras, and engage in fasting to mark the auspicious festival. 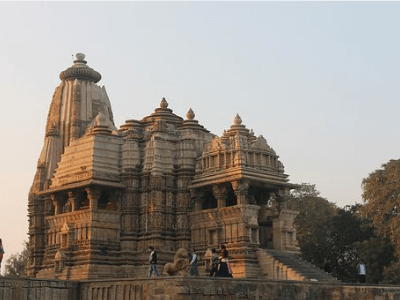 Ujjain, also known as Lord Shiva’s town, follows the rituals of Shivratri that are special and fascinating. The famous Mahakal temple of Jyotirlinga is illuminated by the Shivnavratri festival. The Jyotirlinga Mahakal Temple is visited by thousands of devotees to give prayers and chant mantras all through the night. With a 10-day-long fair that observes the involvement of people from all walks of life from across the world, Maha Shivratri is celebrated with much pomp and grandeur. Besides the ceremonies, with traditional fare and shopping stalls, Ujjain flares up. 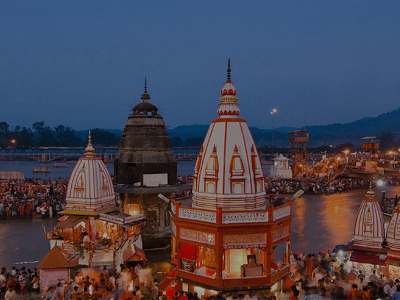 Haridwar and Rishikesh are perfect places for Maha Shivratri festivities if you are traveling through North India. Far-famous as the land of yogis, many ghats and temples are home to Haridwar. Devotees, millions in numbers, meet at Haridwar ahead of Mahashivratri and dive into the Holy Ganga. It is assumed that their wrongdoings or sins are washed away; followed by the grand aarti and thanksgiving. 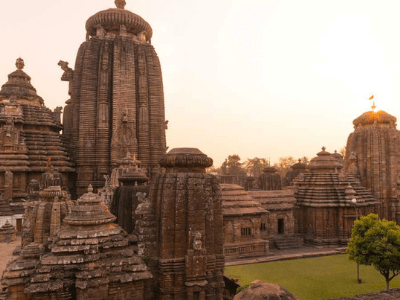 Lingaraj temple is said to be home to the tallest of all the Shivlingas adored in India, situated in the temple city of India, Bhubaneswar. Many devotees assemble on the day of Maha Shivaratri at the Lingaraj Temple; engage in fasting and break their day-long fast after seeing the ‘Mahadipa’ rise atop the temple in the evening. And the temple is beautifully decorated during Maha Shivaratri and after daybreak, ‘Bhajan Samarohs’ are conducted. Adherents also fetch holy water from the sacred rivers and walk barefoot all the way down to the Lingaraj Temple and give it to the Shivalinga! 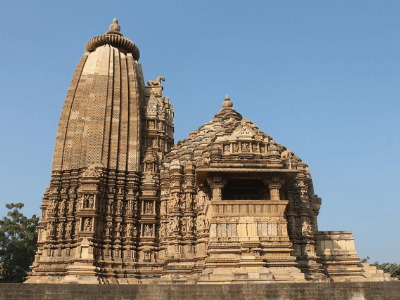 Khajuraho is one of the locations where Mahashivratri is celebrated with great pomp and fervor in Madhya Pradesh. Together with a large number of people visiting the Matangeshwar Temple for the 10-day long fair visited by people from all walks of life who come to give prayers and seek Shiva’s blessings for prosperity, people take a dip in the Sagar tank. 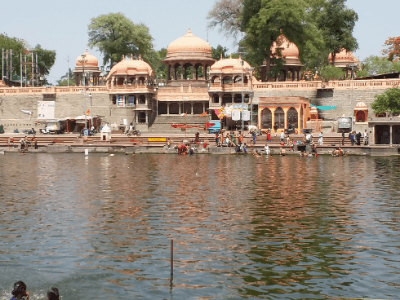 In Ujjain’s Mahakaleshwar Temple, one of the 12 jyotirlingas, Mahashivaratri was largely celebrated. The festival is celebrated on the banks of the Kshipran River near Madhya Pradesh’s Mahakal Forest. Because of its mention in the Puranas, the temple gets its name from the forest that was of religious significance to the locals. 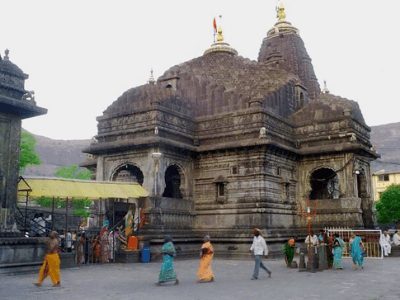 Nashik is home to one of Trimbakeshwar’s Jyotirlingas, Shiva’s dedicated Someshwar Temple, and Nandi’s dedicated Kalpeshwar temple, Shiva’s Ram. In addition to being one of the four Kumbhamela destinations, during Mahashivratri, Nashik became a hub for religious activities. 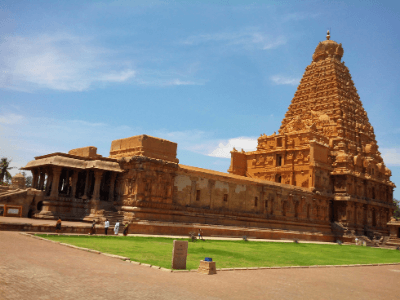 Dedicated to Lord Shiva, one of the most known Hindu temples in Thanjavur is Brihadisvara Temple. It is an outstanding example of Dravidian architecture that is completely known. The temple features an immense colonnaded hallway and one of India’s largest Shiva lingams. The Shiva temple also includes shrines of Nandi, Goddess Parvathi, Lord Kartikeya, Lord Ganesha, Sabhapati, Dakshinamurti, Chandeshvara, Varahi, and others, known for the excellence of its sculpture-the brass Nataraja. It’s not one of South India’s famous Shiva temples, but one of Tamil Nadu’s most visited tourist attractions. 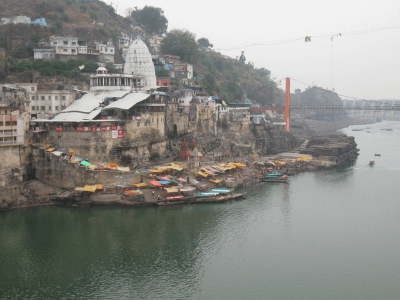 Another famous Shiva temple in India is Omkareshwar. Situated in the Narmada River on an island called Shivapuri, it is one of Shiva’s 12 revered Jyotirlinga shrines. There are two Lord Shiva temples here, one on the island of Omkareshwar and one on the southern bank of the Narmada River on the mainland of Amareshwar. The temple creates a beautiful view due to its position near the water bodies. The temple offers its visitors adequate facilities, including food, parking, stay, and medical facilities. 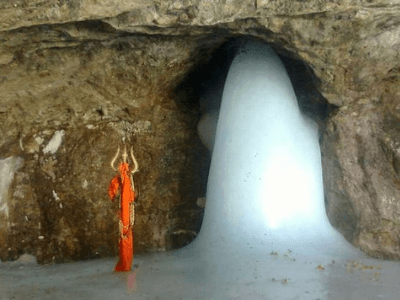 The cave of Amarnath is India’s most respected Shiva temple, which is situated in Jammu and Kashmir. The shrine, positioned at an altitude of 3,888 meters, plays an important role in the lives of Hinduism’s followers. The cave is surrounded by snowcapped mountains and almost the maximum part of the year is shrouded with snow except in the summer when it is open for pilgrims. Every year, Amarnath becomes a pilgrimage center for thousands of Hindu devotees who visit the daunting mountainous terrain. 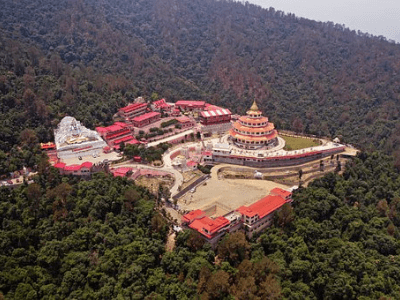 A famous Hindu Shiva temple where God is worshipped as Nilkanth – a form of Lord Shiva – is the Neelkanth Mahadev Temple. The temple is one of Lord Shiva’s most revered holy shrines. The site is surrounded by thick forests and is adjacent to the Nar-Narayan Mountain Ranges. This Shiva temple, surrounded by beautiful valleys, is located at the convergence of the Pankaja and Madhumati Rivers. It is a must-visit spot on the eve of Shivaratri. 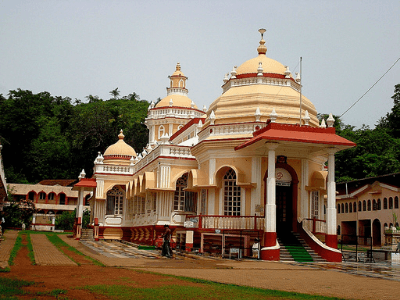 Dedicated to Lord Manguesh, an incarnation of Lord Shiva, one of Goa’s most visited temples is the Mangueshi Temple. It is situated in the village of Mangeshi in Ponda taluk, Goa. As Shivlinga makes it one of Lord Shiva’s most famous temples, the principal deity of the temple is worshipped here. Temple tourists ought to follow a dress code when visiting. Goddess Parvathi and God Ganesha are both enshrined in the temple complex. In this temple, there are statues of several other Gods and Goddesses. 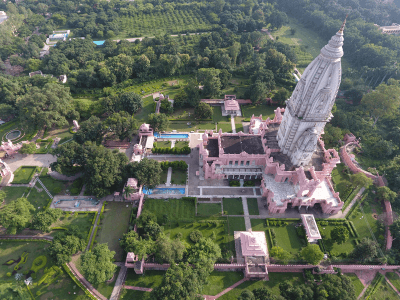 One of India’s most revered Shiva temples, situated in the holy city of Varanasi in the state of Uttar Pradesh, is the Kashi Vishwanath temple. It is one out of the twelve Jyotirlingas, too. It has a significant place in the hearts of the followers of Lord Shiva. The temple is beautifully adorned during the Maha Shivratri festival.

With so much respect and appreciation to Lord Shiva, Maha Shivaratri is one of the traditional festivals celebrated in India. On account of this festival, if you are planning a holy holiday, then schedule your trip accordingly to make it right for this seasonal festival, Shivaratri.

Have a fun and safe trip based on your desire to enjoy the abundant blessings of the Almighty, Lord Shiva, to any of the places mentioned above.