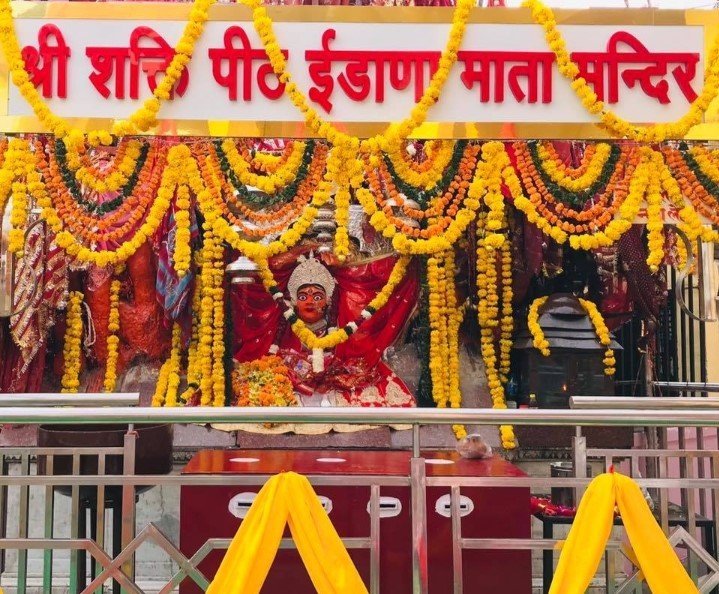 The Indian state of Rajasthan is well known for its numerous tourist destinations, palaces, and forts, probably they are the major attractions that bring out many tourists to the state each year. Dominantly, it is a state filled with miraculous temples comprising abounding stories with superstitious mysteries that are unknown to the people, even scientists have failed to detect the cause for the miracles. People believe in superstition powers past centuries and the same is continued with the present generation.

One such miracle appears to be happening in Idana Mata Temple, one of the most prominent Shaktipeeth of Mewar. It is a famous Hindu temple in Rajasthan located 60 km far from Udaipur Lake city also known as the Goddess of fire. Here, Mata herself takes a fire bath and there is a belief among people that she has supernatural power. Have you ever seen a fire bath that burns the whole temple and only the idol is saved? It is one of the top 10 temples to visit in Rajasthan. There are different types of temples across the country, but this temple has its own story. The story of Idana Mata Temple is very exquisite. You must have seen the eternal flame burning in the temples of the Goddess, but have you noticed that the fire of the Goddess wraps around her body. People from far and wide come to visit, till today the temple has not been built here. In this article, we will know the secrets of this temple.

Other vehicles – You can also reach Idana Mata Temple by another medium such as jeep, car, or auto-rickshaw through Kurabad -Bambora road, Udaipur

Shri Shaktipeeth Idana Mata Temple is famous as Idana Mataji Dham a vital deity of Udaipur. She is popularly known as the Queen of Udaipur Meval. The glory of this temple is very unique. Here, Mataji performs herself in the form of jwala when she is delighted. There is no grand temple of Mata here. The idol is placed under a banyan tree with no roof over it and situated in a very open square also known as the court of the mother (Mata ka darbar). There is a havan kund with a few steps beneath the court of the mother, offerings such as incense sticks, coconut, prayer threads, and other pooja materials are offered to the mother and then immersed in the Havan Kund. Countless Trishul is attached behind the idol of the mother. In this temple, devotees bring chunaris and Trishul as an offering. There is no priest in the temple, the devotees here are the servants of the Mother Goddess.

To know more about Satyanarayana Pooja and its benifits click HERE.

About the Fire bath

Goddess Mata takes a fire bath inside the temple. Local people apprise that the fire gets ignited automatically at least 2-3 times a month. During the fire, everything including makeup and chunaris is destroyed and reduced to ashes except the idol of the mother. The fire bath continues for about 15 minutes. As soon as the fire bath is detected in the Temple, a large number of devotees gather from the surrounding villages to watch the scenario and fulfill their wishes. According to the people, the mother herself assumes the form of Jwaladevi when there is a heavy burden on her. This fire gradually assumes a formidable form and its flames reach 10 to 20 feet. People seeing miraculous fire with their own eyes feel special and blessed by the mother. It is considered the bath of the Goddess and due to this fire bath, the temple could not be built here.  All the wishes of the devotees who have a glimpse of this fire are believed to be fulfilled. People from all over the country are eagerly exhilarated to watch the scenario of fire burning but due to no fixed time, not everyone gets this vision. Earlier, Idana Mata took a fire bath last year on 9 March 2021 at 4 pm. After 5 days again she had a fire bath on 14 March 2021. According to the local people, there was not even a single fire bath in the year 2020. The fire gets extinguished on its own. When the fire gradually subsides, the mother is given a bath with Gangajal water and after that complete makeup is done. Yagna is performed when the mother is calm. There is an Akhand Jyoth inside the temple which keeps burning for 24 hours. The eternal flame is lit inside the glass box of solitude.

Several diseases cured by the mother

Devotees have special faith in this temple. Individuals particularly believe that patients suffering from paralysis get cured by the blessings of the mother. During this trendy age, even trained doctors are unable to cure the diseases and succumbed ahead of this supernatural miracle of the mother. The paralysis patient must sleep the whole night in front of the mother’s statue within the court of the mother, thus continuing for some days until the patient gets healthy. It is said that the mother casts her shadow on those patients and that they get cured. Once they are recovered, the relatives of the patients get a chance to offer silver or wooden parts as per their wish to celebrate their happiness. There is a ritual of offering a trident in the temple when a devotee’s wish is fulfilled. Couples who don’t have children come here to offer a hammock. There is a special tradition for a childless couple of having a swing together to fulfill their wish of having children.

Navratri is an important festival celebrated with glory and joy. Special worship is offered on this day. On Chaithra Shukla Navratri, special makeup is applied to Idana Mataji. Different decorations are being done daily on the temple premises. Mataji’s court is decorated with flowers and balloons. At night, the entire temple complex is lit up with colorful lights. On Chaithra Navratri Shat Chandi Maha Yagya is organized, devotees tell Vedic mantras on this occasion. The special thing about this festival is that it is solemnized all the nine days till the end of the festival and special arrangements of food and shelter are organized for the people coming over there. Devotees have a strong belief that Mata will have a fire bath at least once during the festival and they consider it a blessing from the mother. People sing a variety of bhajans for Goddess Mata.

To know about Hindu temple architecture and its symbolism  click HERE for more details .

The temple is known from the Mahabharat period

The mythological temple was known centuries ago from the Mahabharat period and it is believed that the Pandavas elapsed through this temple and worshipped the Goddess Idana Mata. In ancient times, the king of Mewar and all other local kings used to worship Mata as their Kuldevi and venerated her as the God of Fire.

The temple was built later, what was here before?

According to the people, in years past there was a hill at this place rather than a temple, and the mother’s face emerged on the hilltop, the flames slowly began to appear from the top of the hill automatically every Tuesday and Sunday. The complete hill with the grass all around would get burnt due to which the villagers believed that it was a miracle of the Goddess. At present, the same little statue on the top of the hill is considered Mataji Dham, instead of a mountain, a temple was designed. It is said that in the past 1980s, some ascetic baba came to the village and when he knew about the fire, he started discussing it with the villagers and found out that there is divine power in this place. Later, he established a trident (Trishul) in the same place as a symbol of God. After placing the trident, a Yagya was performed, later the Goddess came into the limelight.

Scientists knelt in front of this divine power. They perpetually endeavored to grasp the logic behind the fire bath, however, all of their attempts were unsuccessful. They fixed cameras around the temple, the three main cameras focused on the idol and all other surroundings where any activity can be captured at intervals of the temple. They unendingly researched for several months and years and also the results were beyond their thinking, within the world of science. Numerous news channels had surveyed this temple, they scrutinized the recording of the cameras and leftover with empty hands. No electric wires are connected inside the temple, therefore there is no probability of a short circuit. A petroleum pump is found 12km distant from the temple, no gasolene pumps nearby which becomes the reason for the fire. To date, the secret of the fire bath has not been unconcealed by anyone.

These days, heaps of development work have been done in this temple settled in a very craggy place, Shri Luv Kumar Singh Krishnawat Kurabad, the patron of Shri Idana Mata Mandir Trust, told that within the previous few years, with the assistance of Bhamashah and the offerings of the temple, several public utility works are done as well as free food and accommodation to the patients, construction of Dharamshala, Gaushala and plenty of alternative helpful works are done.

Also you can check for more details about Amarnath Temple.

Every Sunday, a fair is held outside the temple. Due to this, a crowd of people was spotted on this particular day. Therefore, if you are planning to visit the temple, it is the simplest time to go on weekdays and weekends if you are fascinated to have a glimpse of the fair.

There are some rules to be followed within the temple

Places to visit nearby

Added to wishlistRemoved from wishlist 1